In February 2007 business leaders thought we were mad to suggest they rein in company spending and slow recruitment. ‘It’s time to cash up,’ we said. ‘But we’re in a boom!’ they replied. 12 months on, the recession started to bite and businesses acknowledged that we had made a good call.

Now we are out on a counter-cyclical limb again, telling some 300 people at a recent event, ‘The bad phase is done. It’s time to start investing again.’ You could have heard a pin drop
in that room while the audience reflected on the global economic problems – notably the situation in Greece.

Our views on how to respond to the economy might take people by surprise sometimes. But our commentaries make sense when you take the long view. We are looking back 100 years or more at  previous depressions to generate a deeper understanding of today’s economic trends.

Our observations lead us to make two key points.

• Point one: the economy and the markets have been dislocated since 2007

• Point two: we won’t go straight into a boom 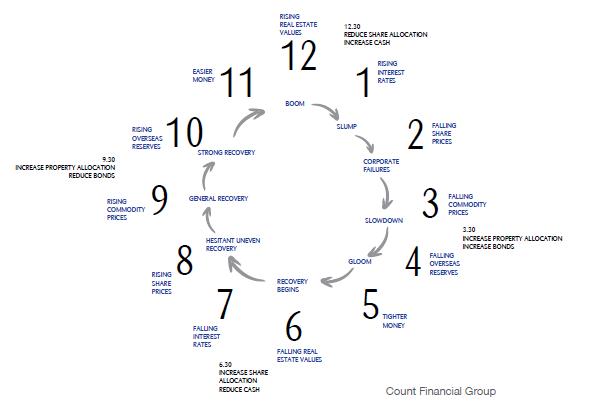 The dislocation is still evident today and the markets are all over the place. Some commentators predict the markets will fall off again before the year-end while futurists predict economic worsening. Investment banks are also saying we will have a long wait before the economy recovers.

Ignore the markets for a moment. Statistically we know that once we have had a double dip, the economy has completed its full cycle. The chance of a triple dip recession is very small and so the next stage of the economic cycle must be a return to recovery.

Time to get positive

We are conscious of lead times when we say, ‘Now is the time to invest in your business.’ Investments such as recruitment, innovation or acquisition usually take 12 to 18 months to deliver. This means investing well ahead of recovery for your company to exploit the coming economic upturn.

‘Just hold your money.’ It seems mad to do anything different.

Boom times are a way off yet…

Some people believe we are predicting a boom anytime now – but we have never promised that. For the last five years we have been saying ‘March 2012 is likely to see the double dip announcement’, but we weren’t implying a boom in April 2012. Rather, the next phase will be the start of recovery.

If we take another look at the economic clock, we can see 8 o’clock shows recovery mode. But boom doesn’t occur until 12 o’clock. After ‘recovery begins’ we have three more recovery stages before we hit the boom: hesitant uneven recovery, general recovery and strong recovery.

…but recovery has begun

The current ‘hesitant and uneven recovery’ is exactly that. Even when we enter ‘general recovery’, the key word is still ‘recovery’ and not ‘boom’. After the double dip, we are likely to see one to two years of ‘hesitant and uneven’ and ‘general’ recovery. The business media will still be reporting bad news, but it will increasingly add good news stories.

The chart above compares three recession strategies. The purple line represents a company that made massive cuts. The managers retrenched staff and wound the business right back, but in doing so they overcut.

As a result, the graph shows almost stagnant growth from 2012 onwards. 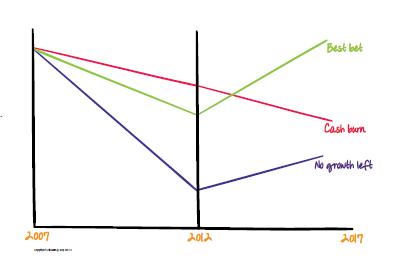 This business will survive because it cut back. But the cuts damaged morale, reduced access to markets and lost clients. Like a badly pruned tree, a business cut too heavily finds re-growth hard.

The red line represents a company that chose to cut lightly. By 2012 they were still hanging on, ‘Any day now the markets will turn around and we’ll be fine.’ But this business has been burning cash since 2007 to keep afloat. As a result of cash burn, the red line keeps plummeting and this business won’t recover even when the economy does.

The green line represents a company that took a middle course and cut back to the right level. With this strategy management maintained morale, farmed business contacts and preserved relationships. This business still has cash and, as a result of its decisions, will grow once again.

The race is on!

We know our 2012 investment message is harder to accept than ‘slow down’ in 2007. When making money in a boom, it’s easy to stop spending for a while. But when you’re not making money in a recession, it’s hard to start investing again.

The fit athlete finds it easy to comply when their coach says, ‘Take a day off.’ But starting to train after an injury is much harder. Isn’t it time you got off the couch and re-entered the race?

This is a guest post by Darren Shirlaw of Shirlaws (https://www.shirlawscoaching.com/), a business coaching firm that works with both mid-sized, owner-managed businesses and large corporate enterprises in 26 countries around the globe.

Here is a link to Darren’s book – A Guide to a Double Dip Recession: https://www.shirlawscoaching.co.uk/business-guide-to-a-double-dip/