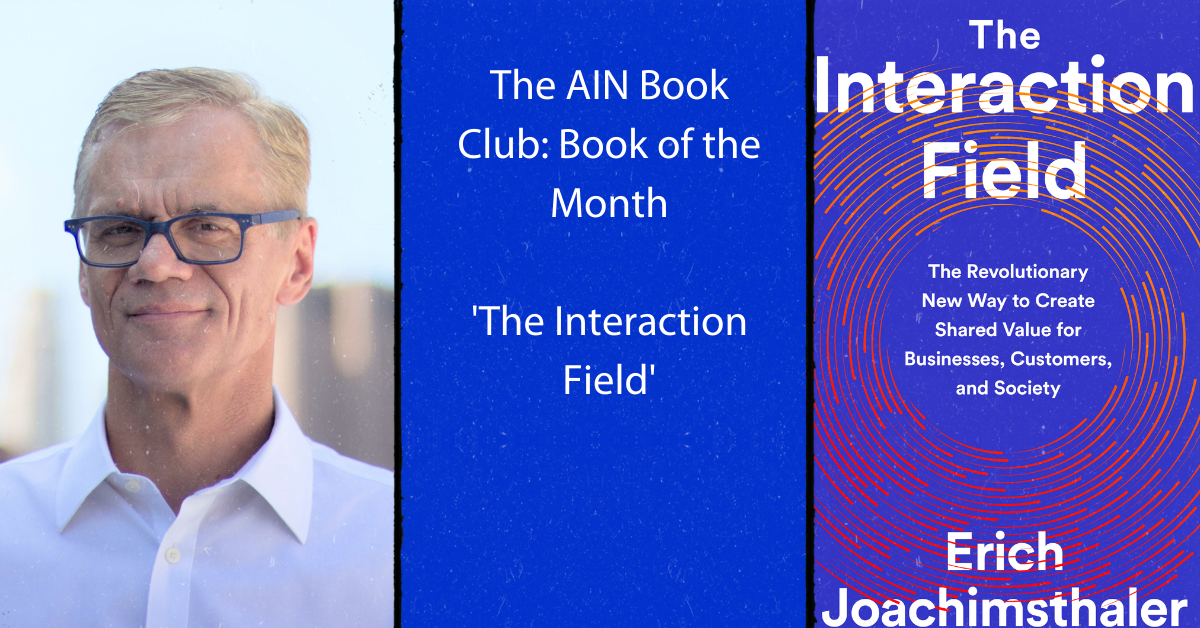 Our book of the month is ‘The Interaction Field’. The Revolutionary New Way to Create Shared Value for Businesses, Customers, and Society by the founder and chief executive of business and brand transformation firm Vivaldi, Erich Joachimsthaler.

The focus of the book is the need for companies to revolutionise how they create value to remain relevant in today’s world. A distinguished business academic and business leader, Joachimsthaler believes we are witnessing the birth of a new type of company that he describes as an ‘interaction field’ company.

These are companies that thrive on the participation in value creation by many different groups: from customers, suppliers, partners, and other stakeholders, but even competitors, observers, independent researchers, and government agencies. Companies that achieve this are able to create an unstoppable momentum and growth called ‘velocity’.

Joachimsthaler considers the different types of value creation that have until now dominated. For decades, it was ‘value-chain companies.’ He describes them as ‘structured as a hierarchy they organized its key activities along the value chain from sourcing to design, manufacturing, marketing, and sales and were optimized on a pipeline.’

Over the past couple of decades we have seen the advent of ‘the platform economy’. from Facebook to Amazon to Netflix, these digitally driven, asset light, and quick to grow companies have disrupted the game. They have made founders very rich and inspired the hopes of startup founders everywhere to set up and monetise new platforms.

Joachimsthaler argues in many ways the value-chain company and the platform company are more similar than you might think. ‘They are both highly transactional. They are focused on a specific exchange, which is typically the provision of a product for money.’

His belief is we are moving on from the ‘platform’ economy and instead nascent firms should focus on building a new kind of company, an ‘interaction field’ company. These new companies which include Tesla and Alibaba, facilitate, and benefit from interactions and data exchanges among multiple people and groups–from customers and stakeholders.

But also from those you wouldn’t expect to be in the mix, like suppliers, software developers, regulators, and even competitors. Everyone in the field works together to solve big, industry-wide, or complex and unpredictable societal problems.

Furthermore by participating in these interconnected groups, interaction field companies can achieve a kind of unstoppable momentum and wild expansion ‘velocity’. He writes ‘It is a new form of multidimensional, constantly accelerating, explosive and smart growth that goes far beyond the traditional measures of sales increase, profit, or market capitalization.’

He also considers the four steps needed if a company is to become an interaction field company. These are:

Joachimsthaler argues that platforms and digital ecosystems typically focus on solving narrow or existing problems, challenges or pain points for customers. For example Uber and Lyft remove frictions of hiring a taxi or airbnb for having somewhere to stay without paying hotel prices.

Interaction field companies frame the challenges they are solving in a much more comprehensive way. These businesses solve complex challenges for customers, for an entire industry or even society. For example, Tesla solves for a lot more than just electric cars as a replacement of gasoline-powered cars. It solves for autonomous driving, lower CO2 emission, better utilization, lower cost of ownership of a car, traffic congestion, and so much more.

2. Designing: It creates shared value by designing for interactions, not just transactions

3. Building: It is built to be open and comprehensive by deeply integrating into the lives of participants

Interaction field companies are inclusive and compete in a world without walls. This is contrary to digital ecosystems and the current discussion around “ecosystem competition,” the notion that ecosystems compete against each other and you must decide which ecosystem to join if you can’t build your own. Companies should be wiser and reconsider the focus on extracting value through competition.

An interaction field company designs the interactions, architecture and governance in such a way that it solves problems and challenges of customers and many participants – including competitors who participate in other ecosystems.

4. Sharing: It is built to share out value with the participants in the interaction field

The goal of the interaction field company is to solve for problems and challenges in the nucleus, the ecosystem and in the overall market. The goal is not just to solve for the cheapest ride or the fastest grocery delivery, but rather to enable fair value distribution. As one leading platform academic, Marshall van Alstyne says, a situation where you create more value than you take.

Given the huge challenges created by the pandemic, this call for companies to focus on interconnectedness and solve deep rooted global problems has particular resonance. As he concludes: ‘Given the fragility of the planet and our global interdependence, interaction fields are the future, not only of business, but of the world.