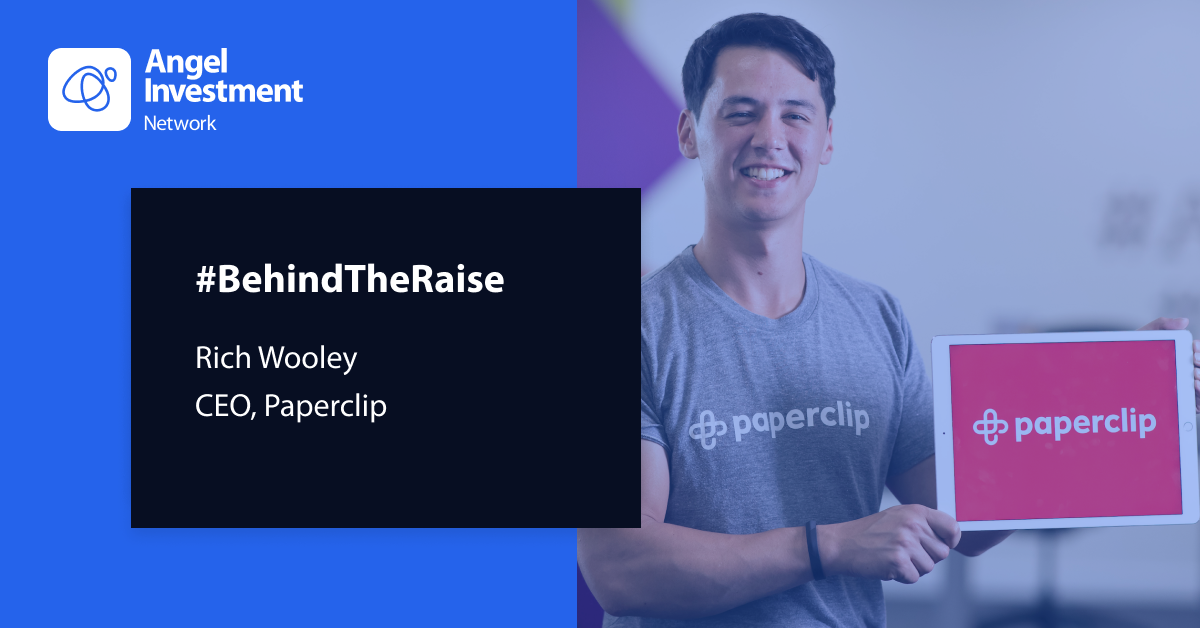 Rich Wooley is the CEO and founder of Paperclip, a challenger marketplace taking on eBay. Rich shares lessons from his fundraising in #BehindTheRaise: What’s the biggest thing he thinks investors look for? What would he do differently if he did it all again? And well, does AIN really work?

Tell us about what got you into start ups:

I’ve always had an entrepreneurial mindset – my first business was at school selling Big Red chewing gum that I imported from the US, it certainly made me more money than my paper round!

At university, my housemate, Alan, (later, co-founder) and I made good money importing clothes from the US and selling them on eBay, and we saw an opportunity there for a challenger marketplace to take on eBay’s monopoly. We shelved the idea at the time, and both went into our respective management consulting careers – but eventually I thought that if I didn’t do something entrepreneurial soon, I might never, so I took a career break and started attending startup events in London like AngelHack and London Startup Weekend. I pitched Paperclip, we came second place, and we got to work.

Why did you decide to raise investment?

Being a marketplace, we realized that we’d need to go for a few years without any discernible revenue, and so we sought investment to fund the runway. Not only this, but we wanted to get a strong network of investors onboard that could add value on the journey – introductions for commercial partnerships and to other investors, and so on.

Marketplaces are always tricky, and it can take a while until the critical mass of buyers and sellers and unit economics start to take shape. However, when they do get it right, they have the power to influence people’s everyday lives – which is something that excites me a lot. Platforms like Amazon, JustEat, Uber, Deliveroo, and Depop are a testament to that – they provide value to millions of people, and have made massive returns for their investors, but they were cash hungry at the start and required significant investment to get to that scale – we are no different in that regard.

What is your top tip for anyone raising investment for the first time?

It’s always tricky at the start.  Your personal network can help a lot at that time – my first investors were a friend from university, a family friend, and my old boss! But other than that, seek investors that add value in the right areas -speak with founders that have exited similar or complementary types of businesses.

Any government support such as grants can help a lot to get momentum going, and speaking to pre-seed funds that can match fund will help things significantly: if you have an offer on the table for match-funding (e.g if you raise £100k then the fund will match that with £100k), then it helps things along significantly.

I’d suggest not being too inflexible on your valuation, but be wary of adapting your investment terms to something you’re not comfortable with, such as giving away too much control or appointing directors that don’t share your vision, or that might become an issue later down the line. The right kind of investors can make your journey far smoother, the wrong type can make it hell.

What attracted investors to your company?

I think investors like the concept of what we’re trying to solve and the novel way that we are approaching it – it helps that the secondhand goods market is massive and also set to expand 500% over the next 5 years – and so the potential is huge. However, at the start, investors are mostly investing in the actual team – and having a strong team really helped with that.

My biggest fundraising mistake was…

Probably the biggest fundraising mistake I made was not pushing back on some of the investment agreement terms in our first VC raise. There are a bunch of reporting, corporate governance and approval processes that I have to go through. For example, I need to gain approval for spending over £5,000 on something, or hiring someone with a salary of over £35,000.

These terms ultimately do benefit and protect our shareholders, so they’re not all bad – but for the stage we’re at, they can be slightly onerous; they  can slow things down at times or take me valuable time to report.

Why did you choose to use Angel Investment Network?

Over the years, I had heard of Angel Investment Network, but I never wanted to pay for it!  Then one day at the Natwest Accelerator, two of the founders I was mentoring came over and told me they’d raised over £250k each on the platform, and so I signed up right away.

I’ve also tried other platforms, both UK and US focused, and have never had the same level of success on them. It’s clear to me that Angel Investment Network has the largest and most active pool of angel investors in the UK – perhaps in the world; I’ve met some incredible people and received investment from all over the world; Australia, Hong Kong, Singapore, South Africa – the list goes on.

What has the funding enabled?

Investment has made a huge difference to the talent we have brought onboard, and the build phase that we’re in. Some of our investors have made valuable introductions, and so it has had a massive impact on our business. Going forwards, I can see that the investor base that we have will be able to provide us even more value as we grow.